Via Lions Roar / I Can’t Believe It’s Not Buddha! 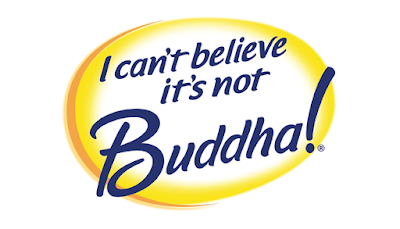 I first started to document these a few years ago after spotting some obvious fakes on Twitter. As they accumulated, I began detailing how to tell when quotes are fake, identifying their origins when I could, and offering some genuine scriptural quotations to show what (as best we know) the Buddha really taught. Fake quotes became teachable moments.

The most common FBQ giveaway, usually, is the style, which may be too flowery, poetic, or literary. Sometimes it’s the vocabulary, which sounds too contemporary for someone who lived some 2,600 years ago.

How do Fake Buddha Quotes arise? There are simple errors of attribution, where someone else’s words have somehow been ascribed to the Buddha. Then there are the “lost in translation” quotes where someone has creatively rendered the Buddha’s words into a “new, improved” version that may express their own view of spirituality but are so far from the original meaning that they’re essentially fake. And sometimes people just make up a spiritual-sounding quote and stick “—the Buddha” on the end. But it can be hard to tell; I’ve been convinced a quote is genuine only to discover that it’s not.

If you can’t find a quote in the scriptures we should regard it as fake.

Is there such a thing as a genuine Buddha quote? We can never know! The Buddha didn’t write anything down. The best record we have of what the historical Buddha said is found in the scriptures of Nikaya Buddhism, including, but not limited to, the Pali canon. But these teachings were passed down orally for hundreds of years before being committed to writing, and in the process they were simplified, edited, and made easier to memorize by being made repetitious. There’s no guarantee that anything in the scriptures is exactly what the Buddha said. But it’s the best we have to go on.

However, we don’t have to be certain about what the Buddha did say in order to know what he didn’t say. My rule of thumb is this: if you can’t find a quote in the scriptures—any scriptures, including those of the Mahayana traditions—we should regard it as fake. If there’s no evidence of him having said something, then we shouldn’t claim he did.

People often tell me that the Buddha was “too spiritual” to be bothered about being misquoted. But the reality is that the scriptures are full of stories in which the Buddha sets some seeker straight about what he’s said, and where he condemns those who have misquoted him.

Make the jump here to read the quotes and more!
Posted by oreydc at 2:14 PM