LET ME BE CLEAR: if you voted for Donald Trump, you voted to attack me and people like me.

You voted to roll back our civil and human rights, allow discrimination against us, and relegate us once again to second-class status. You voted to allow this evil man and his monstrous administration to come after LGBT people, our families, our lives, our jobs, and our love. We warned you, we tried to reason with you, some of us even pleaded with you... but you did it anyway, and then you had the gall to gaslight us, telling us we were wrong to worry about Trump because he managed to spit out the letters "LGBTQ" at his convention and grabbed a rainbow flag onstage once. But whaddya know -- we were right after all, and the destruction of our basic civil liberties that your vote has enabled is unfolding now before our very eyes.


We will defeat this evil because we will outlive and outlast and outfight it, but we will *never* forget the way you voted to oppress and degrade and dehumanize us.

An executive order President Trump signed Monday rescinded an executive order President Obama implemented that would have required companies that contract with the federal government to provide documentation about their compliance with various federal laws. Some have argued that this will make it harder to enforce the LGBT protections President Obama implemented for employees of federal contractors — as well as many other protections those workers enjoyed.

Trump rescinded the Fair Pay and Safe Workplaces order, also known as Executive Order 13673, that President Obama issued in 2014. That order required companies wishing to contract with the federal government to show that they’ve complied with various federal laws and other executive orders.

Notably, Obama issued that order in tandem with Executive Order 13672, which prohibited contractors from discriminating on the basis of sexual orientation or gender identity.

Executive Order 13673 was enjoined by a federal judge in Texas back in October, but had it been implemented, it would have improved accountability for businesses that contract with the federal government. Enforcement of 13672, the LGBT protections, does not require this order, but would have been stronger with it. Whatever its fate in court may have been, it’s now gone forever.

LGBT people are particularly vulnerable to discrimination, even with 13672 still in place. Obama’s LGBT executive order amended previous presidential orders that also protected the employees of contractors on the basis of race, color, religion, sex, national origin, disability, and age, but all of those other categories are also afforded protection under various federal laws (the Civil Rights Act, the Americans with Disabilities Act, and the Age Discrimination in Employment Act). Sexual orientation and gender identity are the only identity categories without explicit nondiscrimination protections under federal law, and fewer than half the states offer LGBT protections at the state level.

That means Obama’s executive order is the only legal force protecting over a million workers.

Camilla Taylor, senior counsel at Lambda Legal, was the first to raise concerns that this change would impact the LGBT community. As she explained to Keen News Service, “It’s sending a message to these companies…that the federal government simply doesn’t care whether or not they violate the law.”
National Center for Lesbian Rights Executive Director Kate Kendell also said in a statement, “President Trump’s quiet take-down yesterday of federal safeguards against employment discrimination for millions of LGBT Americans is yet another example of why our elected officials, advocates, and our community must remain vigilant and continue working together to stop this administration’s regressive and harmful policies.”

When a draft of a “religious freedom” executive order that would have licensed discrimination against LGBT people was circulating, the White House tried to stir up some positive press by promising that it would “leave in place” Obama’s 2014 order protecting LGBT workers.

“President Trump continues to be respectful and supportive of LGBTQ rights,” the statement read.

The New York Times’ Jeremy Peters fell over himself to praise the statement for using “stronger language than any Republican president has before in favor of equal legal protections for gay lesbian, bisexual, and transgender people.”

It’s not a surprise, however, that Trump is walking back other executive orders that weaken the LGBT protections. Trump promised to undo all of Obama’s executive orders.

That “religious freedom” executive order hasn’t gone away either.

A month after the draft leaked and the White House assured LGBT people it wasn’t signing it at that time, White House Press Secretary Sean Spicer told The Heritage Foundation’s Daily Signal that it was still coming. “I think we’ve discussed executive orders in the past, and for the most part we’re not going to get into discussing what may or may not come until we’re ready to announce it,” he said at the time. “So I’m sure as we move forward we’ll have something.”

Make the jump here to read the original article and more

Posted by oreydc at 2:31 PM No comments: Links to this post 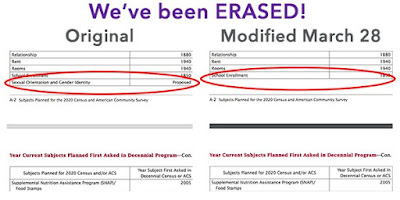 An announcement of Subjects Planned for the 2020 Census and American Community Survey put out by the Census Bureau which included Sexual Orientation and Gender Identity on its list was scrubbed and revised on Tuesday, reappearing without LGBT people as a designated group.


With days before its deadline, the U.S. Census delivered to Congress its report on planned subjects for the survey, including gender, age, race, ethnicity, relationship and homeownership status. Under law, the report is due three years before Census Day, with the next one is set to occur April 1, 2020….

…The report outlines the importance of including these questions in either the decennial U.S. Census or the newer and more detailed annual American Community Survey, which was established in 1985 and seeks to ascertain socio-economic and housing statistics.

But apparently an initial version of this report went too far. The U.S. Census issued a notice shortly afterward indicating the report was corrected because the initial appendix “inadvertently” included LGBT categories.

“The Subjects Planned for the 2020 Census and American Community Survey report released today inadvertently listed sexual orientation and gender identity as a proposed topic in the appendix,” the statement says. “The report has been corrected.”

“Today, the Trump Administration has taken yet another step to deny LGBTQ people freedom, justice, and equity, by choosing to exclude us from the 2020 Census and American Community Survey. LGBTQ people are not counted on the Census—no data is collected on sexual orientation or gender identity. Information from these surveys helps the government to enforce federal laws like the Violence Against Women Act and the Fair Housing Act and to determine how to allocate resources like housing supports and food stamps. If the government doesn’t know how many LGBTQ people live in a community, how can it do its job to ensure we’re getting fair and adequate access to the rights, protections and services we need?”

Posted by oreydc at 12:45 PM No comments: Links to this post 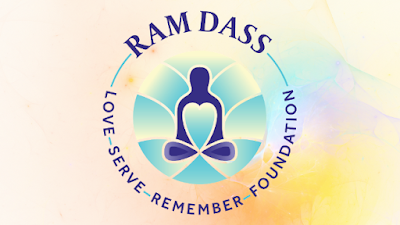 God
and I have become
like two giant fat people living
in a tiny
boat.

We
keep bumping into
each other
and laughing.

- Shams-ud-din Muhammad Hafiz
Posted by oreydc at 12:34 PM No comments: Links to this post

—Clark Strand, "Trees, Butterflies, and the Buddhist Moral Life"
Posted by oreydc at 12:31 PM No comments: Links to this post