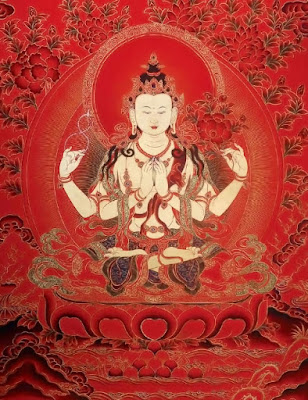 Visualization practice sometimes involves traditional symbolism that Westerners have trouble relating to, says Dzongsar Khyentse Rinpoche. He shows us how we can make the most of this powerful method for transforming perception.

The technique of visualization is employed throughout the Vajrayana practices of Tibetan Buddhism. Its use of our imagination makes it quite different from other meditations, such as shamatha, or calm abiding. Imagination also plays a major part in our deluded experience of life. Everything we encounter and perceive in our daily life is a product of our imagination, but because we believe in the illusions we create, they become such deeply rooted mental habits that we completely forget they are little more than fantasy. The imagination is therefore one of our most powerful tools, and working with it by changing the ways we look at our world is what we call the practice of visualization.
One small problem for beginners is that the English word visualization can be misleading. Most people think visualization means focusing on an image and then holding it in their mind’s eye. But physical appearance is only one element of visualization practice, and by no means the whole story.

Peoples’ attitudes and understanding change according to their situations and education. Until very recently, Buddhist masters brought up in Tibet would have looked on salad and green vegetables as animal fodder and would never have willingly eaten it themselves. Now that Tibetans have become familiar with food outside of Tibet, their attitudes have changed, and it is precisely this kind of shift in our perception that we work with in our visualization, which is also called “creation meditation.”

Another example of the way we adapt our attitudes to situations can be found on the World Wide Web. Most erotic pictures are usually quite small—certainly nowhere near life-size. Logically, it is hard to believe that such tiny images could cause living, breathing human beings to become aroused, but they do. Our habits are so entrenched that, having programmed ourselves to respond to a specific kind of image, it will consistently have the power to turn us on or make us angry, sad, or even depressed, even when we see it on a tiny YouTube screen. To a certain extent, this is how visualization works, and neither size nor so-called realism have anything to do with it.

Were you to tell a worldly friend that everything we see around us—the houses, cars, trees, and shops—does not truly exist as we believe we see it, he would most likely think you had finally lost it.

Yet, according to Vajrayana theory, your perception of this world is unique; it is not seen or experienced in the same way by anyone else because what you see does not exist externally. Vajrayana students who were born and brought up in the modern world often have dif­ficulties with visualization practice. Part of the problem, I think, is that Tibetan teachers like myself assume all sentient beings process things the same way Tibetans do. We teach you to picture the Buddha the way he is traditionally depicted in Tibet, adorned with ornaments that are valued by Tibetans and convey specific mean­ings to them. But becoming a perfect Tibetan iconographer is not the point of visualization practice.

The main purpose of visualization practice is to purify our ordinary, impure perception of the phenomenal world by developing “pure perception.” Unfortunately, though, pure per­ception is yet another notion that tends to be misunderstood. Students often try to re-create a photographic image of a Tibetan painting in their mind, with two-dimensional deities who never blink, surrounded by clouds frozen in space, and with consorts who look like grown-up babies. Practicing this erroneous version of visualization instills in you a far worse form of perception than the one you were born with, and in the process the whole point of pure perception is destroyed.

What, then, is really meant by the terms pure perception and impure perception? “Impure” does not mean that the object of our visualization is covered with dirt or is polluted or defiled in any way; the impurity isn’t “out there.” “Impure,” in this context, means that the problem is “in here”—that is, we look at the world through emotional filters that we label “desire,” “jeal­ousy,” “pride,” “ignorance,” and “aggression.” Everything we perceive is colored by myriad variations of these five emotions. For example, imagine you go to a party, and as you glance at someone you find attractive, your passion filter quickly clicks into place and you immediately label that person “desirable.” If someone else gets in the way, your aggression filter is activated and you label this other person “hideous.” As the evening wears on, other people provoke your insecurities, causing you to sit in judgment of them, make comparisons, defend your choices, and bolster your personal pride by denigrating others—all of which is triggered by the filter of profound ignorance. And the list goes on and on.

These different perceptions arise in our very own mind and are then filtered through our emo­tions. In fact, everything we experience, big and small, will always lead to disappointment because we perpetually forget that everything we perceive is a product of our own mind. Instead, we fixate on perceptions “out there” that we are convinced truly exist. This dynamic is what we work with in the Vajrayana practice of visualization.

It’s all a matter of training the mind. One of the many methods offered within the three yanas of the Mahayana teachings is that of the Shravakayana, the “path of the listener.” In the Shravakayana, the student relinquishes clinging to “self” by disciplining body and speech using particular methods—for example, shaving the head, begging for alms, wearing saffron-colored robes, and refraining from worldly activities like getting married or having sex. Training the mind in the Bodhisattvayana is also about practicing discipline in body and speech as well as meditat­ing on compassion, arousing bodhichitta, and so on. Lastly, the Vajrayana not only trains the mind through discipline and meditation on compas­sion, but it also offers methods for transforming our impure perception into pure perception.

Make the Jump here to read the full article and more
Posted by oreydc at 5:43 PM No comments:

Giving a whole new spin to the term 'world music' -- A.R.Rahman spins his magic on an absolute scorcher, featuring Jordanian singer --Farah Siraj along with Nepalese Buddhist Nun Ani Choying. With the traditional Nepalese Buddhist hymn forming the base of the song, layered with a traditional Jordanian melody, and bridged seamlessly with composition written by A.R.Rahman, this song truly brings together diverse cultures and musical genres. Everything from the background vocals to Sivamani's percussion takes a big leap across musical styles and creates a storm of inspired rhythms, to give this track that extra flavour. Completely based around the theme of motherhood, compassion & ultimately happiness, this is the very first track of what promises to be an unforgettable Season 3 of CS@MTV!

If you cannot view the video here, go to:
http://mtv.in.com/videos/all-videos/s...

Tu Zariya, hun mein zariya (You're a path, so am I)
Aur uski kirpa, dariya dariya (And His compassion, like an ocean..an ocean)
Hain jo ankhiya nirmal, duniya nirmal (The world is pure, if pure is your vision)
Chalka..chalka, chhal chhal chhal chhal (Brimming o'er, brimming o'er, on and on)

Tu Zariya, hun mein zariya (You're a path, so am I)
Aur uski kirpa, dariya dariya (And His compassion, like an ocean..an ocean)
Hain jo ankhiya nirmal, duniya nirmal (The world is pure, if pure is your vision)
Chalka..chalka, chhal chhal chhal chhal (Brimming o'er, brimming o'er, on and on)

Posted by oreydc at 4:33 PM No comments:

Publicado em 8 de mar de 2012
Ani Choying Drolma (born June 4, 1971, in Kathmandu, Nepal), also known as Choying Drolma and Ani Choying (Ani, "nun", is an honorific), is a Buddhist nun and musician from the Nagi Gompa nunnery in Nepal. She is known in Nepal and throughout the world for bringing many Tibetan Buddhist chants and feast songs to mainstream audiences.
She has a powerful and excellent vocal voice.

Following are the Translations in English:

Benefits in Reciting and Holding The Great Compassion Mantra

If you would like to know more about BUDDHISM, this website would be very useful:
http://www.cttbusa.org
Posted by oreydc at 4:26 PM No comments:

Posted by oreydc at 4:25 PM No comments:

People come to practice for all kinds of reasons. In the end it doesn’t matter what their motivation is, as long as they stick with it. Eventually, they’ll get there.

—Lewis Richmond, “Aging as a Spiritual Practice”
Posted by oreydc at 12:56 PM No comments: