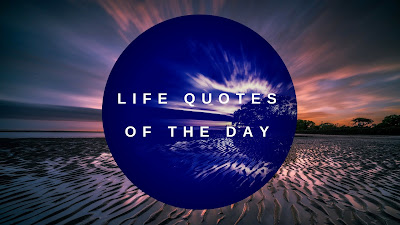 Life Quotes of the Day
In modern society most of us don’t want to be in touch with ourselves; we want to be in touch with other things like religion, sports, politics, a book - we want to forget ourselves. Anytime we have leisure, we want to invite something else to enter us, opening ourselves to the television and telling the television to come and colonize us.
- Thích Nhất Hạnh
Each mental act opens up a new dimension of actuality. In a manner of speaking, your slightest thought gives birth to worlds. This is not a dry metaphysical statement. It should arouse within you the strongest feelings of creativity and speculation. It is impossible for any being to be sterile, for any idea to die, or any ability to go unfulfilled.
- Seth
When you do not know what to do, relax and tell yourself that other portions of yourself do know; they will take over. Give yourself some rest. Remind yourself that in many ways you are a very successful person as you are. Success does not necessarily involve great intellect or great position or great wealth; it has to do with inner integrity. Remember that.
- Seth
If I were asked to define the Hindu creed, I should simply say: Search after truth through non-violent means. A man may not believe in God and still call himself a Hindu. Hinduism is a relentless pursuit after truth… Hinduism is the religion of truth. Truth is God. Denial of God we have known. Denial of truth we have not known.
- Mahatma Gandhi
I find it interesting that the meanest life, the poorest existence, is attributed to God’s will, but as human beings become more affluent, as their living standard and style begin to ascend the material scale, God descends the scale of responsibility at commensurate speed.
- Maya Angelou
What I try to do is write. I may write for two weeks ‘the cat sat on the mat, that is that, not a rat,’…. And it might be just the most boring and awful stuff. But I try. When I’m writing, I write. And then it’s as if the muse is convinced that I’m serious and says, ‘Okay. Okay. I’ll come.
- Maya Angelou
When you walk to the edge of all the light you have and take that first step into the darkness of the unknown, you must believe that one of two things will happen. There will be something solid for you to stand upon or you will be taught to fly.
- Patrick Overton
I want you to remember who you are, despite the bad things that are happening to you. Because those bad things aren’t you. They are just things that happen to you. You need to accept that who you are and the things that happen you, are not one and the same.
- Colleen Hoover
The most unfathomable schools and sages have never attained to the gravity which dwells in the eyes of a baby of three months old. It is the gravity of astonishment at the universe, and astonishment at the universe is not mysticism, but a transcendent common-sense. The fascination of children lies in this: that with each of them all things are remade, and the universe is put again upon its trial.
- G. K. Chesterton
If you want to forget something or someone, never hate it, or never hate him/her. Everything and everyone that you hate is engraved upon your heart; if you want to let go of something, if you want to forget, you cannot hate.
- C. JoyBell C.
You’re afraid of imagination and even more afraid of dreams. Afraid of the responsibility that begins in dreams. But you have to sleep and dreams are a part of sleep. When you’re awake you can suppress imagination but you can’t suppress dreams.
- Haruki Murakami
Posted by oreydc at 1:15 PM No comments: Links to this post

Via Daily Dharma: Step into the Present

Walking meditation is really to enjoy the walking—walking not in order to arrive, just for walking, to be in the present moment, and to enjoy each step.

—Thich Nhat Hanh, “Walk Like A Buddha”
Posted by oreydc at 12:44 PM No comments: Links to this post