AJ Minneci·Thursday, March 28, 2019
I worked on the equal marriage campaign and came across many homophobes in the process; dealing with homophobes will similarly come into account with this campaign. Thus, how do you handle bigotry? If it’s a question of psychology, you get to the facts and personal experiences (if you have them as an lgbtq individual or family/friend-of), if it’s religion you trade bible verses.
If anyone has anything to add be sure to do so in the comments.
First determine if the person is coming from a psychological or religious point of view.
PSYCHOLOGICAL
History: Same-sex attraction was ORIGINALLY considered a mental illness. However, due to further scientific and psychological studies the American Psychiatric Association (APA) declared in 1973 that it NOT a mental illness. Since then, the top psychiatric institutes in the United States agree.
Can it be changed: No. Conversion therapy has not been found to work since one cannot change their sexual orientation. A person with same-sex attraction cannot turn straight any more than a straight person can become someone with same-sex attraction. This form of therapy has only been found to cause suicidal and at-risk behavior due to ingraining self-hate.
Do people choose it: Never. People with same-sex attraction are born that way. Many with same-sex attraction initially try to deny it and “pray it away” due to knowing the stigmas and lack of acceptance that it will bring to their life. Nobody chooses to lose their friends and family.
RELIGIOUS
History: Right-Wing love to fall back on religion when it comes to same-sex attraction. Their favorite bible verse is “You shall not lie with a male as with women; it is an abomination” Leviticus 18 and 20.
Here’s some bible verses for you to use:
“Christ is all, and is in all.” Colossians 3:11-13
“Let no doubt remain outstanding, except the continuing debt to love one another, for whoever loves others has fulfilled the law.” Romans 13:8-10
“I grieve for you, Jonathan, my brother; you were dear to me. Your love for me was wonderful, more wonderful than that of women.” Samuel 1:26 (yep, that’s right – the biblical story of Goliath slayer David and King Saul’s son may have purposeful same-sex attraction undertones).
Here’s a scene from ‘Shameless’ that you can use for inspiration:
https://www.youtube.com/watch?v=ZiFnSVqu1D4
In addition, the biblical phrases that the Right-Wing point to are historically unfounded. All of these lines are not about love – they’re all about historic overindulgence and over-sexualization rather than about the love that two men share. Their lines lack historical context.
For more information visit this articles:
http://religion.blogs.cnn.com/2012/05/15/my-take-what-the-bible-really-says-about-homosexuality/
https://medium.com/@adamnicholasphillips/the-bible-does-not-condemn-homosexuality-seriously-it-doesn-t-13ae949d6619
IS THERE A GAY AGENDA?
No, there isn’t; but you might come across somebody who thinks Pete is just another piece in their mythologized “gay agenda” so let’s break it down.
Do LGBTQ people want special rights? No, we just want equal rights - it’d help to know some of the statistics concerning LGBT discrimination which can be found here:
https://www.facebook.com/notes/president-pete-buttigieg-for-2020/lgbtq-discrimination/849310868752510/
What is this “gay agenda” - well, it’s the belief that we in the LGBTQ community want to turn everyone gay, that we’re teaching our ways in schools, and that we’re taking over the media.
If the person says we want to turn everyone gay - remind them that people are born with same-sex attraction and that people can’t be turned.
If the person says we are in charge of schools and education - remind them of the discrimination LGBTQ students still face at school - the simple act of coming out could lead to being kicked out and many can’t attend prom with their boyfriend or girlfriend.
If the person says we’re taking over the media - remind them that there is still very little LGBTQ representation in film and on TV. It was ONLY in 2018 that one of the big film studios WIDELY released a teenage gay romantic film - it’s notable because it’s the only one of its kind. There are no shows on public TV today (at least to my knowledge) with an LGBTQ protagonist. If anything, the LGBTQ community is noticeably underrepresented.
Interesting side note “the Gay Agenda” is the Right-Wing blaming the LGBTQ community for everything they do to us: Conversion therapy, kicking out and banning LGBTQ students, and an overwhelming majority of media characters are 100% straight.
In other words, this is an easy notion to combat just by asking for examples.
PHRASES TO STAY AWAY FROM
“One shouldn’t care what one does in their bedrooms” – saying this simply could accidentally imply that you agree with the other person’s homophobic views and you just don’t think those views are important as the person that you’re discussing with.
“Love the sinner, hate the sin” – this is a more controversial statement: many in the LGBTQ community, myself included do not like this phrase since it indicates the person still thinks we’re in the wrong rather than acting in accordance to how God made us.
Posted by oreydc at 6:30 PM No comments: Links to this post

Via FB: Happy Birthday to poet Lawrence Ferlinghetti who turns 100 today. Pity the nation whose breath is money . . . 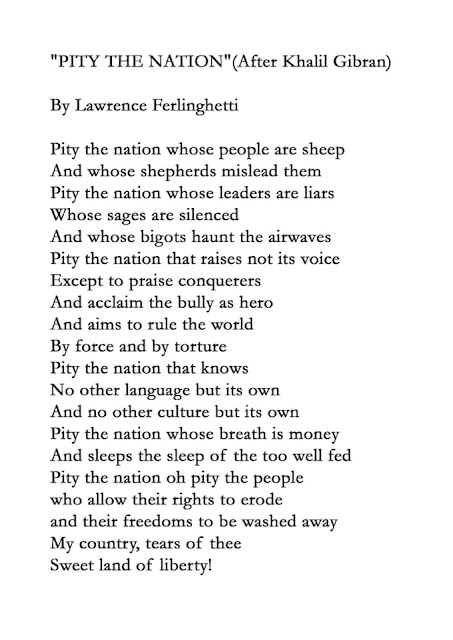 Posted by oreydc at 6:25 PM No comments: Links to this post

Via Daily Dharma: A Light Touch

Discovering emptiness brings a lightness of heart, flexibility, and an ease that rests in all things. The more solidly we grasp our identity, the more solid our problems become.

—Jack Kornfield, “No Self or True Self?”
Posted by oreydc at 11:12 AM No comments: Links to this post

Via Tricycle: RAIN - Getting started on a spiritual path takes guts.

R stands for recognizing what is happening in this moment. Someone just walked too close to you on the sidewalk or didn’t give you what you feel is your “right of way,” and boom, you’re angry. The “R” is simply to notice what is happening, to be present enough to know that something is happening. This is not a small thing. Many people are immediately reactive—and worse, they blame the other person for causing their reaction. The point is to be awake, to pay attention.

A stands for accepting. This does not mean that you wanted what just happened to happen. It simply means that you acknowledge that it did. You name it: for example, “anger is here.” The idea is that although you are not going to indulge the emotion or thought with further thinking or righteousness or another emotion, neither do you resist or avert or distract yourself from what’s happening. You simply acknowledge and name what is happening. You are willing to be open to whatever it is.

I stands for investigating the sensations in the body. This step is primarily a physical noticing. What does anger feel like? The heart beats faster, there can be a flush of energy and heat and a tightening of certain muscles. These physical events are what we label as “anger.” This energetic emotional component has to be willingly and thoroughly felt until the body returns to open relaxation. You breathe and wait and breathe and feel the body, at first tight and then slowly changing, relaxing and opening, letting go. If this is not thoroughly done, then we haven’t really felt the emotion that was triggered by the initial thought, and that energy gets stuck in the body and adds to the conditioned structure that was triggered in the first place. This openness to the physical event is what integrates the energy, dissipates it, and—if it is practiced over and over— eventually dissolves that particular egoic structure, which has no concrete core. The realization that the egoic system will eventually dissolve if we don’t add more thought or energy to it is a wonderful one when first experienced, and a real taste of the potential freedom to come if we continue with practice.

N stands for not identifying. There’s no need to identify a “me’” in what just happened. It was just a passing mental and emotional event, like watching a scene in a movie or the clouds as they move through the sky. We don’t have to build and rebuild a “me” on the passing content of the body-mind. Instead, we can stand as the observer. This not-identifying is tricky, but when the first change of identity shifts from the content of mind to the observer, we can see that the content is not who we are. This is the first real shift of freedom. Eventually identification as “the observer” drops away as well, but to simply make the shift is a good place to start.


Make the jump here to read the full article and more
Posted by oreydc at 11:10 AM No comments: Links to this post