The technique of the witness is to merely sit with the fear and be aware of it before it becomes so consuming that there’s no space left. The image I usually use is that of a picture frame and a painting of a gray cloud against a blue sky. But the picture frame is a little too small. So you bend the canvas around to frame it. But in doing so you lost all the blue sky. So you end up with just a framed gray cloud. It fills the entire frame.
So when you say, 'I’m afraid,' or, 'I’m depressed,' if you enlarged the frame so that just a little blue space shows, you would say, ‘ah, a cloud.’ That is what the witness is. The witness is that tiny little blue over in the corner that leads you to say, ‘ah, fear.’

Via Daily Dharma: Expanding Your Net of Compassion

Not favoring any one thing over another allows you to center yourself within a boundless net of interconnection and to expand your circle of caring.

—Wendy Egyoku Nakao Roshi, “Hold to the Center!”
Posted by oreydc at 10:41 AM No comments:

Via tricycle // Anger How to recognize it, work with it, and even find wisdom in it. 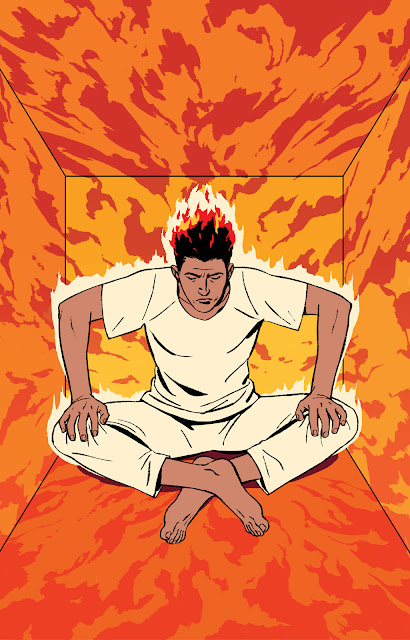 Anger is one of the densest forms of communication. It conveys more information, more quickly, than almost any other type of emotion.” This is how Charles Duhigg sums up a conversation he had with James Averill, professor emeritus of psychology at UMass, Amherst. Averill also noted that a bit of anger can quickly clear up unspoken resentments, unacknowledged boundary violations, and unaddressed imbalances. On the other hand, in Buddhism anger is often regarded as taboo, an emotional reaction to be avoided as much as possible. The 8th-century monk-scholar Shantideva, in The Way of the Bodhisattva, writes that a single moment of anger destroys the good karma built up over a thousand eons. These are two very different views, but both agree that anger is very powerful.

For instance, Jan Willis, professor emeritus at Wesleyan, described an occasion when she was furiously angry while at Lama Yeshe’s center in Nepal. She remembers standing outside the temple fuming at something or other. Lama Yeshe crept up beside her and whispered in her ear, “Buddha mind very angry today.” Her mind stopped. The mind that is angry is the same as the mind of buddha? She had never considered that possibility. It changed everything.

Anger was no longer a force or demon that took you over. It became, instead, a movement in mind, a mind as clear and empty as the sky.


Make the jump here to read the full article and more
Posted by oreydc at 10:38 AM No comments:

Via Daily Dharma: Detaching from Attachment

Emptiness doesn’t mean that the mind is annihilated. All that’s annihilated is clinging and attachment. What you have to do is to see what emptiness is like as it actually appears and then not latch onto it.