Via Tricycle: Architecture of Awakening 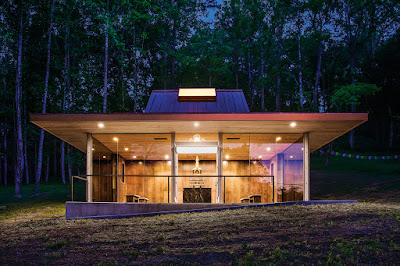 “Architecture creates a place to rest. To learn. To think. To grow. To connect,” he wrote. “It nurtures us, helps us to be better people.”

Anthony Poon wasn’t looking for a teacher or a spiritual practice in 2008 when he received a call from an old friend. The Tibetan Buddhist community at the Bodhi Path retreat center in Natural Bridge, Virginia, had some building projects in mind, and she wondered if that would interest him.

Friendship aside, Poon was not an obvious choice. An architect with degrees from the University of California, Berkeley, and the Harvard Graduate School of Design, he has over three hundred projects to his name and a slew of prestigious awards, including, in 2018, the American Institute of Architects’ highest accolade, the National Design Award for Best in Housing Design. Poon Design, based in Los Angeles, is known for elegant, modernist designs for luxury residences, upscale restaurants, and cutting-edge commercial, educational, and cultural facilities. Though Poon’s portfolio contains several churches and a chapel for Air Force retirees, at the time of his friend’s phone call he had never been inside a Buddhist center.

To read the full article and more click here
Posted by oreydc at 11:21 AM No comments: Links to this post

Via Daily Dharma: Making Our Own Peace

Forgiveness is really not about someone’s harmful behavior; it’s about our own relationship with our past. When we begin the work of forgiveness, it is primarily a practice for ourselves.

—Gina Sharpe, “The Power of Forgiveness”

CLICK HERE TO READ THE FULL ARTICLE
Posted by oreydc at 11:18 AM No comments: Links to this post