Via This Day in Gay History : Divine 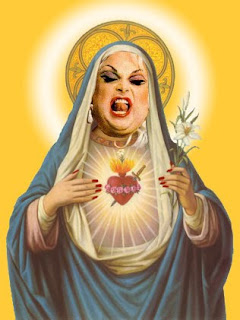 1945 -
DIVINE, American actor born (ne Glenn Milstead) (d. 1988); best known for his drag persona, Divine. In the 1970s, Milstead starred as Divine in a number of New York City theater pieces, including Tom Eyen’s classic camp women's prison drama, Women Behind Bars, which was a major off-Broadway hit in 1976, playing the lead role of the evil matron, Pauline. Divine returned to the stage in another Tom Eyen off-Broadway play, The Neon Woman, where he played the role of Flash Storm, the owner of a sleazy strip club plagued by a series of murders.
Eyen's play was loosely based on famed burlesque entertainer Gypsy Rose Lee's book, "The G-String Murders". He appeared with the Cockettes in San Francisco. After their New York bomb, the Cockettes came back to San Francisco and performed their final show in the summer of 1972, "Journey to the Center of Uranus." Divine, joined the group, in her San Francisco debut, performing her song "The Crab at the Center of Uranus" dressed as a lobster.
Milstead starred in a number of films and was part of the regular cast known as the Dreamlanders. The Dreamlanders appeared in many of John Waters' earlier works such as Pink Flamingos, Female Trouble, Polyester, and Hairspray.
In 1985 Milstead appeared opposite Tab Hunter in their hit Lust in the Dust, repeating their successful pairing in Polyester. He is also remembered as a major character in the documentary homage Divine Trash by Steve Yeager, covering the life and work of John Waters.
In 1988, the British film The Fruit Machine, also known as Wonderland in the United States, used Milstead's songs in a nightclub disco dance sequence that showcased an early Robbie Coltrane in drag as "Annabelle", the club's owner (a cross between Divine and Judy Garland in The Wizard of Oz).
Late in his career, Milstead also played in non-drag roles in his last three films: Trouble in Mind, Hairspray, and Out of the Dark. In Hairspray he played two roles, one male and one female (which he had first done in the earlier Female Trouble).
Here’s what Divine had to say about his “Edna Turnblad” (and honey...he ain’t no John Travolta!):
“For all those people who always thought I was nothing more than a drag queen, wait until they see what I agreed to look like in Hairspray! Drag queens are supposed to be hung up on glamooouur. Meanwhile, on my first day on location, I came out as Edna Turnblad--in my flip-flops and hideous housedress, with varicose veins drawn on my nubble-shaved legs and everything that is wrong with me accentuated, schlepping along in these pin curls and barely any makeup--and I walked right by the crew. Just kept going. Not one person on the set recognized me or even noticed me, because I looked like half the women in Baltimore. I had to go up to John and stand face-front for him to realize who I was. He was thrilled. I was crushed.”
Divine was the inspiration for the design of Ursula the Sea-Witch in the Disney classic The Little Mermaid.
Posted by oreydc at 10:41 AM No comments: Links to this post

Grief can lead us to a profound understanding that reaches beyond our individual loss. It opens us to the most essential truth of our lives: the truth of impermanence, the causes of suffering, and the illusion of separateness.

—Mark Matousek, “A Splinter of Love”

CLICK HERE TO READ THE FULL ARTICLE
Posted by oreydc at 10:12 AM No comments: Links to this post