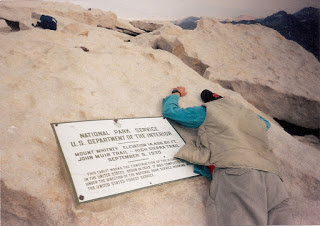 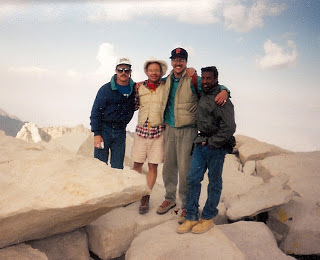 That normally would be a fun fact and irrelevant, but there was a hitch. Besides the fact that we thought we were prepared, and we should have over nighted at a higher elevation, we all made it to the top in a day - I with a great case of altitude sickness. After we finished, we decided instead to go down to Lone Pine, a small town at the base, and get a motel instead of camping. So, we checked in, took turns showering, and went to a restaurant for dinner. As soon as we ordered, I decided to run (Lower elevation = more air) 2 blocks down to an ATM.

Upon returning, Kim asked me where the ATM was… and ran there too… dinner was served, Kim didn´t show up… we got worried, about an hour later, he showed up and this is what had happened. He was jogging to the ATM, a sheriff stopped asked him where he thought he was going, made him get in the car, and took him to the motel (on the edge of town) where, luckily, he had made the reservation and the desk folks remembered who he was. The sheriff then let him free, but Kim had to walk back. (1990, no cell phones). He was annoyed, we were outraged and wanted to file a complaint or whatever… he begged us to forget about it. But being the psychologist in the group,  explained to the well-meaning white guys, took the opportunity, went on to share how this was something most all black men were used to… I am all this time later, still shaking and enraged.

Now that cities in both my countries are upside down in relation to social justice, racism, homophobia, and creeping fascism… I remembered that amazing weekend, with great guys on top of the world. And like many of the events that have taken this entire planet to the edge, a great day turned ugly in a moment because of the stupidity of people I had thought were there to protect us all. Since coming out, I have learned that if I keep my mouth shut in difficult situations I can pass, other friends, colleagues, family members do not have that luxury, especially in regards to racism. I am grateful, yet I also feel some responsibility.

So, if my beautiful brothers and sisters of color will allow me, and forgive me when I step into it, I stand by us all. Check me when I do it wrong, but know you have an ally here!