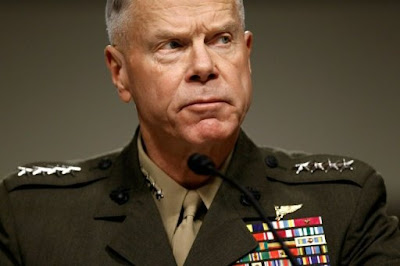 Even though he thinks having openly gay soldiers will cost Marines their limbs, USMC Commandant James Amos says he will personally lead the implementation of the repeal of DADT. Here's his full statement as published by Stars & Stripes:

"Fidelity is the essence of the United States Marine Corps. Above all else, we are loyal to the Constitution, our Commander in Chief, Congress, our Chain of Command, and the American people. The House of Representatives and the Senate have voted to repeal Title 10, US Code 654 "Policy Concerning Homosexuality in the United States Armed Forces." As stated during my testimony before Congress in September and again during hearings before the Senate Armed Services Committee earlier this month, the Marine Corps will step out smartly to faithfully implement this new policy. I, and the Sergeant Major of the Marine Corps, will personally lead this effort, thus ensuring the respect and dignity due all Marines. On this matter, we look forward to further demonstrating to the American people the discipline and loyalty that have been the hallmark of the United States Marine Corps for over 235 years."