Via JMG: A Different Kind Of Hood 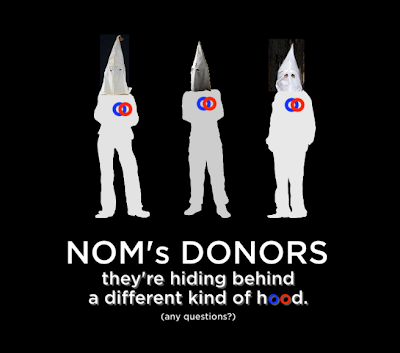 UPDATE: For those who say the above image goes too far, let's not forget the below actual sign carried by one NOM supporter. 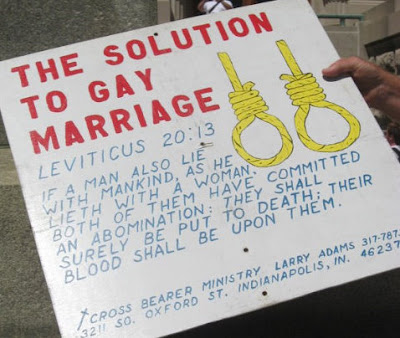 Labels: campaign finance, NOM, Sean Chapin
reposted from Joe
Posted by oreydc at 9:02 PM No comments: Links to this post

Posted by oreydc at 7:52 PM No comments: Links to this post

In an interview with hate group head Linda Harvey, the American Family Association's Gary Glenn said that corporations should not hire any homosexuals. Right Wing Watch has the quote.


What ridiculous folly to suggest that only those individuals who engage in homosexual behavior given all of its severe medical consequences constitute the best and the brightest. It’s not really bright to engage in behavior that puts you at dramatically higher risk of mental illness and substance abuse and AIDS and cancer and hepatitis, and according to various sources, premature death. So to suggest that engaging in that type of behavior defines someone as the best and brightest, which seems to be the line coming out of corporate America, is just ridiculous.

Harvey responded: "You’re right. And higher rates of domestic violence and unstable relationships. I would not think of a homosexual person as a good employment risk, I just wouldn’t."
Labels: AFA, bigotry, douchenozzles, employment, hate groups, Linda Harvey
reposted from Joe
Posted by oreydc at 7:49 AM No comments: Links to this post