Via JMG: On The Origins Of HIV 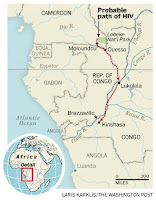 The Washington Post has published a fascinating history of the origins of HIV, based on the fairly widely-accepted theory that the virus sprang from chimp to human during the tumultuous colonial days of western Africa, possibly beginning in the 1880s.


Most of this colonial world didn’t have enough potential victims for such a fragile virus to start a major epidemic. HIV is harder to transmit than many other infections. People can have sex hundreds of times without passing the virus on. To spread widely, HIV requires a population large enough to sustain an outbreak and a sexual culture in which people often have more than one partner, creating networks of interaction that propel the virus onward. To fulfill its grim destiny, HIV needed a kind of place never before seen in Central Africa but one that now was rising in the heart of the region: a big, thriving, hectic place jammed with people and energy, where old rules were cast aside amid the tumult of new commerce. It needed Kinshasa. It was here, hundreds of miles downriver from Cameroon, that HIV began to grow beyond a mere outbreak. It was here that AIDS grew into an epidemic.

Posted by oreydc at 4:48 PM No comments: Links to this post

Who We Really Are

- Kosho Uchiyama Roshi, "The Bodhisattva Vow: Eight Views"
Read the entire article in the Tricycle Wisdom Collection
Posted by oreydc at 10:45 AM No comments: Links to this post