Via Lion's Roar: What is the Buddhist view on sexuality? 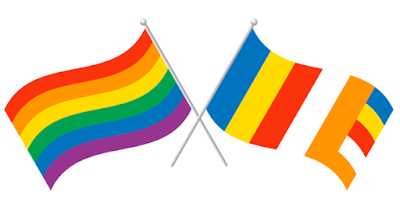 The Buddhist flag (right) debuted in Sri Lanka in 1855 and was adopted internationally in 1952. The rainbow pride flag, designed by Gilbert Baker in 1978, has become a symbol of LGBTIQ hope and progress worldwide.
Read More

The texts are not the endpoint of reflection, but rather the beginning of it, and the great masters of old are not irrelevant "dead brown men," but living conversation partners whose thought, as reflected in their writings, can help us reconstruct our lives so that they lead to the flourishing of self, of others, and of the communities in which we live. [...]

Posted by oreydc at 12:12 PM No comments: Links to this post

Via Daily Dharma: An Unedited Life

We think we know our own life, but what we know is only an edited version, colored by our emotions and narrow vision. How close can we come to the original draft?

—Gregg Krech, “Naikan Therapy”
Posted by oreydc at 11:55 AM No comments: Links to this post