Via Them: Sober Queer Spaces Are Giving LGBTQ+ People a Place to Just Be 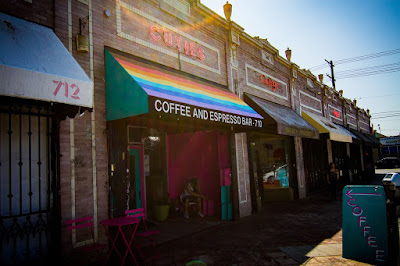 Across the country, queer cafés, mixers, and stores are providing options that aren't gay bars — and that's revolutionary.

On any given day in Los Angeles, LGBTQ+ locals and tourists have few choices when it comes to finding other queer and trans people — at least, in a space that’s not a bar. The go-tos, especially for cisgender gay men of legal drinking age, are gay bars, largely found in the tony city of West Hollywood. But for everyone else who identifies as LGBTQ+, such spaces are less than ideal, and for youth and those who are sober or in recovery, they aren’t an option at all.
That's one reason Virginia Bauman and her business partner Iris Bainum-Houle opened Cuties, a queer-owned, operated, and focused café in East Hollywood.

Open daily from mornings into late afternoons, with events often hosted in the evenings, Cuties is an accessible, alcohol-free spot for LGBTQ+ people to just be — something Bauman says doesn't exist much elsewhere in the city.

"There's no comfort in loitering at the LGBT Center," Bauman says. "There's no reason that you need to have to be at Cuties; you don't. And that's one of the magic things about coffee — it's incredibly accessible."

Posted by oreydc at 8:09 PM No comments: Links to this post

Via Daily Dharma: Open to It All

Become still, quiet the mind, sit like the mountain and sky—stable and undivided in the face of everything that comes up. Open to the unpleasant part, the down-in-the-dumps part, the making-mistakes part, the prolonged-aching-in-the-heart part. The not knowing and the bouts of joy. Become one in the same as yourself, or “one with” your life.

—Diane Musho Hamilton, “Practice Is the Way”
Posted by oreydc at 10:26 AM No comments: Links to this post