Spain has granted citizenship to Puerto Rico-born Ricky Martin, who may be seeking a legal venue to marry his boyfriend.

Spokesman Jose Blanco told a news conference that ministers had agreed to grant him a “letter of naturalization”, issued in special circumstances, because of his “personal and professional links with Spain”. Spanish newspaper El Pais reported that Martin sought citizenship in order to marry boyfriend Carlos Gonzalez Abella, with whom he is bringing up his twin three-year-old sons. Spain passed legislation allowing same-sex marriages in 2005, only the third country to do so at the time, with 20,000 gay couples entering into marriage since.

Labels: gay artists, Ricky Martin, Spain
reposted from Joe
Posted by oreydc at 7:19 PM No comments: Links to this post 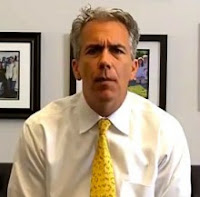 The Family Research Council has named Rep. Joe Walsh (R-IL) as their "True Blue" pro-family leader, even though Walsh owes over $100,000 in unpaid child support.


"We thank Cong. Walsh who has voted consistently to defend faith, family and freedom,” said FRCA President Tony Perkins. “Cong. Walsh and other ‘True Blue Members’ have voted to repeal Obamacare, de-fund Planned Parenthood, end government funding for abortion within the health care law, uphold the Defense of Marriage Act, and continue support for school choice. I applaud their commitment to uphold the institutions of marriage and family."

Walsh responded to the honor by crowing, "Defending American values have always been one of my top priorities, and this reward reaffirms my dedication to that fight."