If Republicans Don’t Want to be Compared to Nazis, They Should Stop Acting Like Nazis

We have witnessed a great deal of conservative madness over the past five years, since Barack Obama was elected president of the United States. Some of us during the intervening years have wondered where it would end. I was one of those who early on began to compare the Religious Right and the Tea Party to the Nazis. It was not a careless or spiteful comparison, but one based on the evidence of their rhetoric and avowed goals. There is a reason I made the above map resemble the Nazi flag.

It is no accident that the Nazi cry of Germany for the Germans is echoed by the Republican cry of America for Americans. Once upon a time there were “real” Germans and our own time brought us “real” Americans – the obvious consequence of such claims being that everybody else was an interloper, inferior – the “other.” With a single utterance, people like Sarah Palin, like Hitler before her, was able to delegitimize half of the population. The “other” become parasites attacking the health of the country. This is a claim made by both Nazis and the Religious Right.
Of course, that horrified progressives, to say such horrible things. Godwin’s Law was, of course, invoked (we need a law about the invocation of Godwin’s Law – seriously). But a comparison should not be shied away from because it seems extreme. As I have argued repeatedly both here and elsewhere, the comparison holds water. If somebody acts like a Nazi, we should certainly be able to point out that they are acting like a Nazi.
Which brings us to first Kansas, a state which was driven to the brink of Nazification by Republicans, and then, perhaps in horror of what it had almost done, backed away, and then to Arizona, which is now our first state to embrace Nazism. Sure, S.B. 1062 is not a law until Gov. Jan Brewer signs it, and she says she needs more time, but who, really, needs more time to decide whether or not to oppose Nazism? Other than Ted Nugent, that is.
Many of us saw this coming. We were laughed at. We warned people what the Religious Right wanted, what it intended. As with the Nazi Party in its early days, far too many people did not take the forces of oppression seriously. This tendency to deny unpleasant realities, even while they are occurring, is frustrating to say the least. It is dangerous at the worst: People will not fight back against something they cannot bring themselves to believe.
Believe it. People used to talk about Nazi Germany in disbelief even after the fact. How could it happen? It could happen very easily. It had happened before in human history and there was no reason to believe it would not happen again. And again. It could happen here, too, if we are not vigilant. In state after Republican state, we are seeing what amounts to state-sanctioned violence against the other, from Stand Your Ground laws to Arizona’s S.B. 1062.
The one constant is intolerant conservative Christianity, the driving force of oppression dating all the way back to the dawn of the movement. When conservative Christianity achieved a dominant position in the Roman Empire, the first thing it did was produce the Theodosian Code, which I have warned of here on previous occasions. The Theodosian Code was, like S.B. 1062, a tool of oppression, a collection of laws passed by the emperor Constantine and his successors, “was presented to the empire as a Christmas present in 438.”[1]
The attitude of conservative Christians toward the “Other,” one of, if you can’t convince them, force them, is embraced today by Republican lawmakers. Bishop Caesarius of Arles told his sixth century flock to admonish unbelievers “harshly,” to chide them “severely,” and if this failed, to strike them, to pull their hair, even to forcibly restrain them. In this he was following the advice of John Chrysostom, a Saint, who advised “rebuke” by way of punching the unbeliever: “Smite him on the face; strike his mouth; sanctify thy hand with the blow.”[2]
As Sabine MacCormack observes of the infamous Book 16, “In the Theodosian Code…we can document the incorporation of sins into the purview of the criminal code; and as a result, the range of actions surveyed by the law and changed and expanded.”[3] In other words, Book 16 “articulates for the first time in a Roman law code, what religion and what religious practices ‘are to be done and what are to be avoided’; and what was ‘the True Religion.’”[4]
By the 450s, a generation after the publication of the Code, MacMullen argues that the “legal system became wholly an instrument of persecution.”[5] Look at the violence we see today and argue that we are not far from the Theodosian, or in more modern terms, Nazi precipice. As MacMullen makes clear, witnessing did not end with harsh words, or even with fists:


Government too, at the urging of the bishops weighed in with threats, and more than threats, of fines, confiscation, exile, imprisonment, flogging, torture, beheading, and crucifixion. What more could be imagined? Nothing. The extremes of conceivable pressure were brought to bear. Thus, over the course of many centuries, compliance was eventually secured and the empire made Christian in truth.[6]

Substitute America for empire, and you have the dominionist dream for our country and our time. From the top down, the deck was stacked against the other, whoever they might be, from Jews to Pagans and even to other Christians. There are good reasons you don’t see Gnostic churches today on your street corner. Nor more than Christians and then Nazis would abide a synagogue, will conservative Christians abide temples and mosques. Jews and gays were targets of Theodosian Christianity before they were targets of Nazism and finally, of the Religious Right.
The antecedents of the Religious Right’s war on tolerance are ancient. Nazism is ultimately but a way stop on that road, a product itself of all that came before, and the most recent example we have of what happens when intolerance is legislated into law – as is in danger of happening in America today. 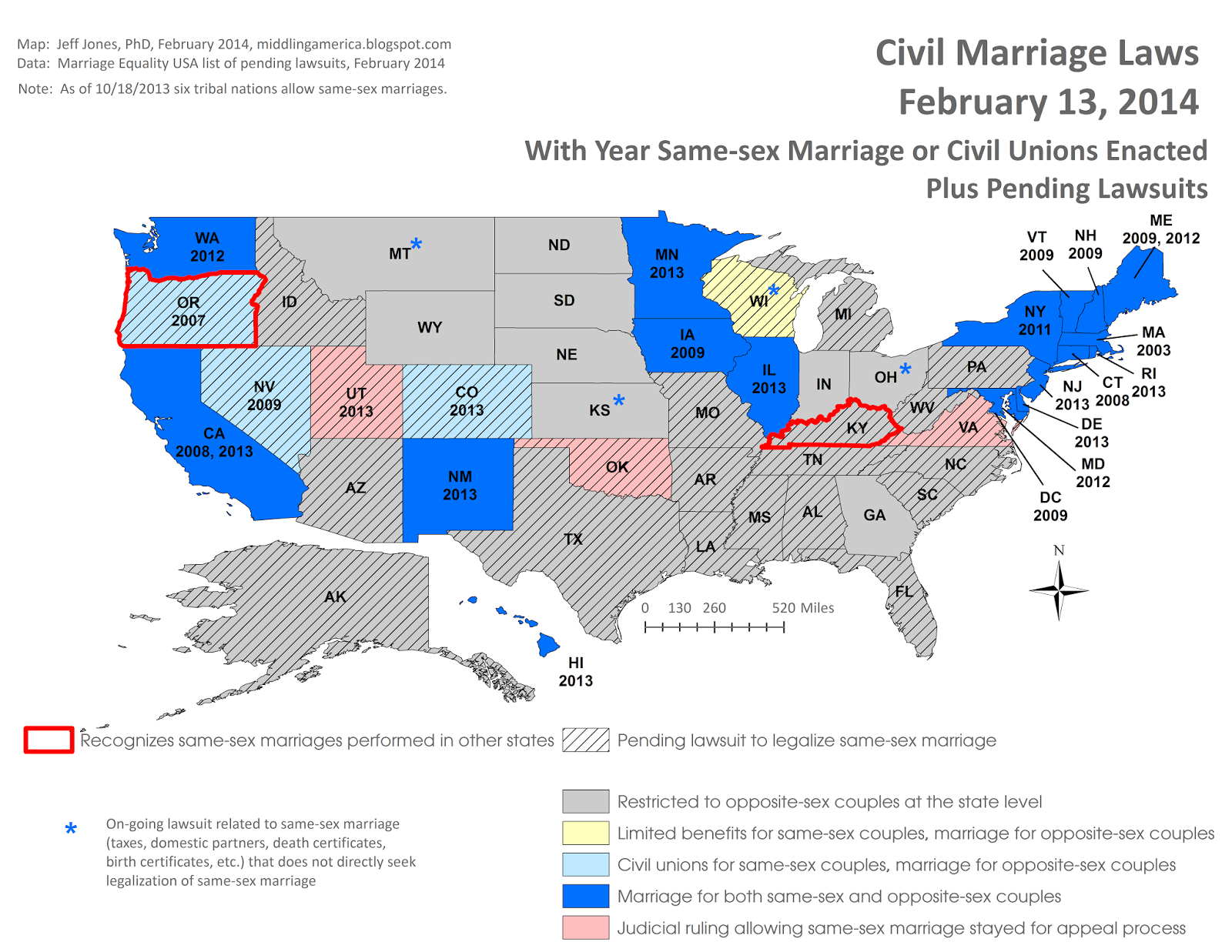 Posted by oreydc at 8:37 PM No comments:

Via JMG: INDIA: Law Criminalizing Homosexuality May Be Years From Being Repealed

When [in 2009] the Delhi High Court suspended the draconian Section 377 of the Indian penal code which dated from the days of British rule, India’s lesbian, gay, bisexual and transgender community thought there was no turning back. Five years on the euphoria has gone. In December, the country’s highest court overturned the lower court’s ruling, once again making gay sex a crime punishable by up to ten years in jail and putting tens of millions of Indians at risk of prosecution or harassment. Last month, that court – which had said gay people in India were just a “minuscule minority” – upheld its decision against an appeal and said it was up to the government to change the law. But there is little chance for that. While senior figures of the ruling Congress party supported repealing Section 377, the leadership of the main opposition party, which most analysts believe is set to secure power in an upcoming election, do not. As it was, the current parliament held its last session on Friday; it could be years before a new parliament amends the law.


Reposted from Joe Jervis
Posted by oreydc at 2:18 PM No comments:

Via JMG: UGANDA: Anti-Gay Bill On Hold While President Challenges US Scientists To Disprove That Homosexuality Is A Choice 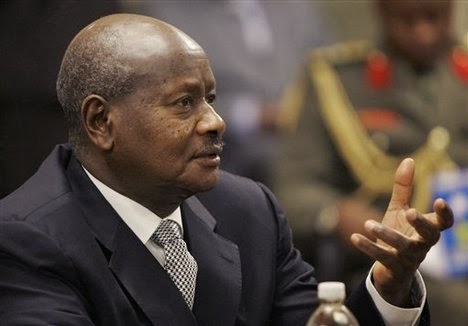 Ugandan President Yoweri Museveni has put off signing the anti-gay bill while he challenges American scientists to disprove that homosexuality is a choice.


A week ago Museveni had insisted that he would approve the legislation, prompting criticism from US president Barack Obama and former president Bill Clinton. The US warned that the move would "complicate" relations with Uganda, to which it gives more than $400m (£240m) in aid annually. Uganda dismissed the threat as blackmail but on Friday it emerged that Museveni had done a u-turn and would not sign the proposed law until after hearing from scientists. "I therefore encourage the US government to help us by working with our scientists to study whether, indeed, there are people who are born homosexual," he wrote. "When that is proved, we can review this legislation." But he added: "Africans do not seek to impose their views on anybody. We do not want anybody to impose their views on us. This very debate was provoked by western groups who come to our schools and try to recruit children into homosexuality."

My guess is that Obama's strong denouncement of the bill is working. For now. Ugandan Minister of Ethics Simon Lokodo is very unhappy.


"It is a social style of life that is acquired," he said. "The point is they chose to be homosexual and are trying to recruit others. The commercialisation of homosexuality is unacceptable. If they were doing it in their own rooms we wouldn't mind, but when they go for children, that's not fair. They are beasts of the forest." Lokodo condemned western meddling in Uganda's domestic affairs. "When I heard the US saying they will cut aid, we said fine. Will they be comfortable if we come to America and started practising polygamy? Homosexuality is strange to us and polygamy is strange to you. We have divergent views. When they call me wrong, I will call them wrong. Don't bring it to Africa; keep it there."

Last week Lokodo declared that Uganda shows tolerance to gay people by "not slaughtering them."


Reposted from Joe Jervis
Posted by oreydc at 2:15 PM No comments:

- Marc Lesser, "Do Less, Accomplish More"
Read the entire article in the Wisdom Collection through February 24, 2014
For full access at any time, become a Tricycle Community Supporting or Sustaining Member