What I want to be when I grow up: Daniel Orey at TEDxSacramento has made it past 1800 hits!

Thnaks ever so much to those of you who have taken time to watch...
Posted by oreydc at 2:31 PM No comments: Links to this post


Posted by oreydc at 1:56 PM No comments: Links to this post 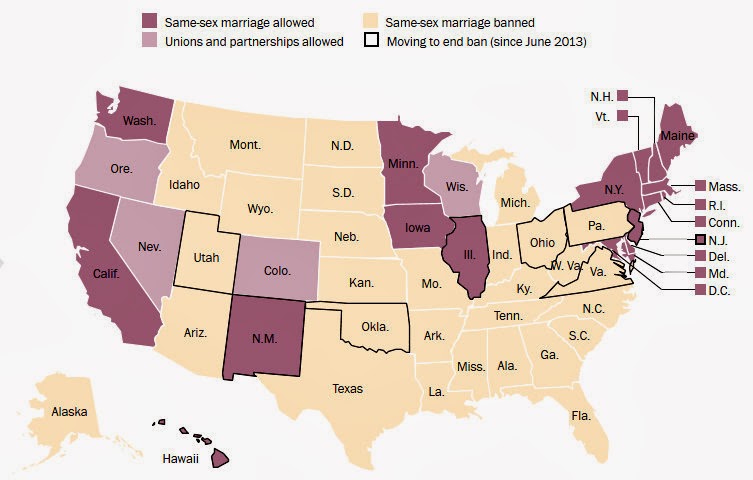 The Washington Post has published an interactive marriage equality map which doesn't show all the lawsuits currently in progress, but it does highlight the states where we seem to be closest to a win.


Reposted from Joe Jervis
Posted by oreydc at 1:27 PM No comments: Links to this post

Via JMG: Vatican Survey: Vast Majority Of Catholics Reject The Rules Of The Vatican


According to a new Vatican survey, the "vast majority" of Catholics in Germany and Switzerland reject the Vatican's rules about "contraception, sexual morality, gay unions and divorce."

The Vatican took the unusual step of commissioning the surveys ahead of a major meeting of bishops that Pope Francis has called for October to discuss family issues. The poll was sent last year to every national conference of bishops with a request to share it widely among Catholic institutions, parishes and individuals. This week, German and Swiss bishops reported the results: The church's core teachings on sexual morals, birth control, homosexuality, marriage and divorce were rejected as unrealistic and outdated by the vast majority of Catholics, who nevertheless said they were active in parish life and considered their faith vitally important. Also surprising was the eagerness with which the bishops publicized the results. The German bishops' conference released them simultaneously in German, Italian and English on their website, and the Swiss held a press conference.

Of particular note, survey respondents found the Vatican's ban on contraception to be "blatantly immoral" when it comes to the use of condoms to stop HIV transmission. Several years ago, former Pope Benedict made statements regarding condoms and HIV that some interpreted as a softening of the church's stance. But at a 2011 HIV/AIDS conference held at the Vatican, officials reiterated their opposition to all condom use.


Reposted from Joe Jervis
Posted by oreydc at 1:24 PM No comments: Links to this post

- Robert Aitken Roshi, “No Mean Preacher”
Read the entire article in the Wisdom Collection through February 6, 2014
For full access at any time, become a Tricycle Community Supporting or Sustaining Member

Posted by oreydc at 8:54 AM No comments: Links to this post

Unfortunately this article is disingenuous at best.  The Bahai Faith is homophobic, and prejudicial against gays and lesbians. GLBT Bahaís are treated as second class citizens, and shunned... they have let many of us know that we are not welcome in their communities... someone needs to do their homework here.﻿

Homosexuality is a very common topic in all faiths — the Bahá’í Faith is no different. Unlike many other religions, however homosexuality is not prevented nor advocated against because it would be “against the spirit of the Faith,” according to a 2010 letter from Kenneth E. Bowers, Secretary of the National Spiritual Assembly of the Bahá’ís of the United States. The Bahá’í Faith teaches that it is only acceptable to have sexual expression within marriage. Another teaching states that marriage is between a man and woman. The importance of absolute chastity and personal restraint in unmarried persons is stressed more so than the gender of a potential partner.

Homosexuality, according to Bahá’í Faith teachings, is a condition to control and subdue, but recently, singling out homosexuality over other transgressions is frowned upon. Gay and lesbians may have membership in the Bahá’í community, and although it is commonplace to advise and sympathize with them, membership is permitted. However, those who have “accepted the Revelation of Bahá’u’lláh” are not permitted to enter into a same-sex marriage.

Bahá’í teachings say that homosexuals should not be condemned as outcasts, nor do Bahá’ís expect those of other faiths to follow Bahá’í laws. Bowers goes on to say, “In attempting to reconcile what may appear to be conflicting obligations, it is important to understand that the Bahá’í community does not seek to impose its values on others, nor does it pass judgment on others on the basis of its own moral standards.”

The writings state to treat all with respect and dignity without exception; discrimination and intolerance is not supported by any Bahá’í teachings. The adherence of laws for social conduct remains up to the individual, unless their actions are causing harm to the community. Spiritual Assemblies are instructed to be patient, as well as to persuade members to accept the laws out of conviction and desire, rather than blind faith. The Bahá’í Faith for the most part neither advocates nor discriminates against the gay community.

The only time an individual is sanctioned by the Spiritual Assembly for being damaging to the image of the Bahá’í Faith in regards to sexuality is if an individual is being sexually promiscuous. These sanctions remove the ability to contribute funds, vote or hold office within the community and bar an individual from the Nineteen Day Feast, a monthly spiritual gathering. This consequence is used only in cases of public scandal and in very flagrant cases. Often the individual is placed on probation, if disregard continues the assembly may remove the person’s administrative rights. This is similar to ex-communication of the Catholic faith; however other Bahá’í members are not directed to avoid fellowship and interaction with the de-administrated individual.

Posted by oreydc at 8:47 AM No comments: Links to this post