Posted by oreydc at 11:32 PM No comments: Links to this post

Via JMG: Perkins: 'It Gets Better' Is Disgusting 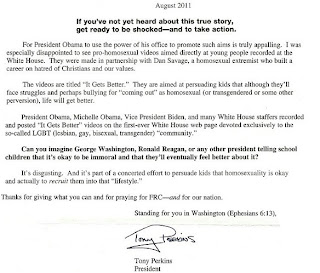 Right Wing Watch reports that the Family Research Council's latest plea for donations uses the It Gets Better Project as its topic. Because anti-bullying efforts are "disgusting" and all good Christian children should have the right to beat those "perverts" whenever they deserve it.

Tim Hardaway turns it all around, and is now publicly supporting gay rights

Usually when a famous person goes on an offensive rant that flies in the face of tact or compassion or both at the same time, the real hope that stems from the expected fallout is that the voice behind the rant will come around to a more enlightened way of thinking. And not, as is usually the case, just issue the standard "to anyone I may have offended" apology before moving on.


Former NBA All-Star Tim Hardaway, who infamously and proudly stated his homophobia in a radio interview four years ago, has done a bit more than move on. Not only has he taken on a kinder view of the LGBT community, but he's also standing up for those who are trying to stand up for its rights. The Chicago native and Miami denizen was back in El Paso, Texas, this week (where he went college) to lend his support to a trio of politicians who are in danger of being recalled due to their stance on gay rights.

The El Paso Times can take it from here:
Posted by oreydc at 11:24 PM No comments: Links to this post