Disgusting things get thrown on the earth, but the earth isn’t horrified by them. When you make your mind like the earth, neither agreeable nor disagreeable sensory impressions will take charge of it.

—Thanissaro Bhikkhu, "The Joy of Effort"

Posted by oreydc at 12:23 PM No comments: Links to this post 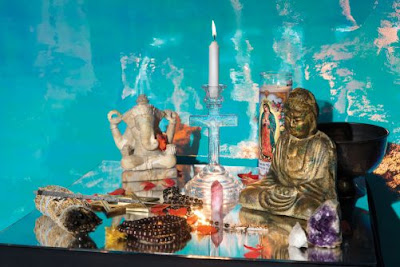 In this special section from the Spring 2017 issue of Tricycle, religion scholars, journalists, and laypeople share their thoughts on a phenomenon that is here to stay: the rising number of people who identify as spiritual, but not religious.

As Professor of Religious Studies at Rice University William B. Parsons says in his introduction:

“During a year of research among the religiously unaffiliated, for example, the American writer Kaya Oakes encountered many more people who dip in and out of various Buddhist traditions than people who actually identify as Buddhists. To help with background, historian Matt Hedstrom sheds some light on little-known Protestant educational trends that may have paved the way for contemporary mindfulness. Religious studies scholar Andrea Jain offers an example from the world of yoga that parallels some of the strongest critiques—familiar to Tricycle readers—of spirituality as a consumer product. And finally, Diane Winston, a journalist and historian of religion, relates her experience teaching an undergraduate class in which students seem neither religious nor spiritual.”

SBNR: Past and Present, with William B. Parsons
Meet the “Buddhish” Nones, with Kaya Oakes
The Case of Bikram Yoga, with Andrea Jain
Scientific Spirituality, with Matthew Hedstrom
Two Sides of the Same Coin, with Diane Winston
Posted by oreydc at 12:19 PM No comments: Links to this post