Israel has posted a request for volunteer gay envoys to promote the nation's diversity.


The Israeli government is launching a program to recruit homosexuals to be unofficial envoys. In a bid to boost its international image, the country's ministry of Public Diplomacy and Diaspora Affairs has established a cadre of diverse volunteers who speak about Israel around the world. In a recent post on its website, the ministry encouraged minorities and members of the homosexual community to step forward. Ministry spokesman Gal Ilan said Thursday that the goal was to highlight Israel's diversity. He said when people think about Israel, the homosexual community is often overlooked.

Some have charged Israel with pinkwashing in order to promote gay tourism. From the New York Times:

The growing global gay movement against the Israeli occupation has named these tactics “pinkwashing”: a deliberate strategy to conceal the continuing violations of Palestinians’ human rights behind an image of modernity signified by Israeli gay life. Aeyal Gross, a professor of law at Tel Aviv University, argues that “gay rights have essentially become a public-relations tool,” even though “conservative and especially religious politicians remain fiercely homophobic.” Pinkwashing not only manipulates the hard-won gains of Israel’s gay community, but it also ignores the existence of Palestinian gay-rights organizations.

Via JMG: Frothy: I Hardly Talk About The Gays

Although he's known in the foreign press primarily by the "homohater" label, Rick Santorum says that he's hardly been speaking about the gays. Igor Volsky has the quote at Think Progress:


If you’ve been following me out on the trail, I haven’t been talking a lot about this. Although I strongly believe in it. What I’ve been talking about as I did last night on my acceptance speech where didn’t talk about this issue, I talked about the importance of getting this economy going and talked about my grandfather and coming here for freedom. And this is the fundamental issue in this campaign is whether government is going to be big and obtrusive and telling people how to manage their — their lives or — and are they going to support the basic values of faith and family that allow government to be limited and allow our economy to be strong. Those are the things I talked about and did across Iowa.

The boldest of the lying no longer takes our breath away in the slightest.
Labels: batshittery, fascists, liars, Rick Santorum
Reposted from Joe
Posted by oreydc at 5:54 PM No comments: Links to this post

Via JMG: TENNESSEE: Christianists Push Bill To Legalize Bullying Based On Religion


Here we go again, just like we saw in Michigan. Tennessee's WSMV reports on a new bill that is a "top priority" of the Family Action Council.


A proposal by some state lawmakers is already under fire, even before the legislative session begins. They're considering making a change in the law to allow students to speak out against homosexuality, if that's what their religious beliefs call for. Supporters have said this is about protecting the free-speech rights of students who want to express their views on homosexuality. But gay rights groups are calling the idea a "license to bully." Kelly Fussman is the founder of the No Hate Club at Hendersonville High School.

She says she sees examples of bullying every single day. "I've had a lot of friends bullied for just being who they are, whether it's for their sexuality, their gender identity, their religion," she said. Fussman says she is worried about the bill in the legislature that she believes could make the verbal abuse worse. The proposal would alter the state's anti-bullying laws to allow students to speak their religious and political views against homosexuality without punishment as long as the student isn't threatening harm or damaging property. 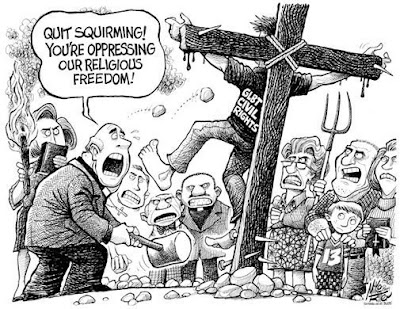 Breaking the chains that bind us to suffering

- Bodhin Kjolhede, "Pain, Passion, and the Precepts"
Read the entire article in the Tricycle Wisdom Collection
Posted by oreydc at 9:07 AM No comments: Links to this post


Nancy Pelosi's office just informed us that a rather well known gay deportation case has been put on hold. It might have been nice for the administration itself to actually tell us about this.
Pelosi Statement on Anthony John Makk and Bradford Wells
Washington, D.C. – Democratic Leader Nancy Pelosi released the following statement today on the decision by the U.S. Citizenship and Immigration Services (USCIS) to grant deferred action to Anthony John Makk. This afternoon, Pelosi spoke to Anthony John Makk and his husband, Bradford Wells, and informed them of the decision. Leader Pelosi had personally intervened in this case.
“The positive resolution of Anthony’s immigration petition is a personal victory for Bradford and Anthony, and keeps this loving couple together.
“Anthony would have faced deportation because of the discriminatory Defense of Marriage Act, even though he has lived in the United States for more than 20 years, has no criminal history, has never lived here illegally and is the primary caregiver to his husband. The Obama Administration’s recent efforts to prioritize immigration enforcement for the removal of criminals and others who pose a threat to national helped pave the way for today’s good news.
More background from our previous reporting on this.
Posted by oreydc at 9:06 AM No comments: Links to this post