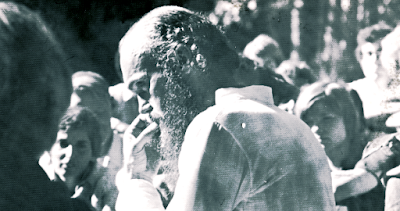 There is a way of shifting consciousness so that you see that we are all one in the form of many...You see that a starving person or a dying person or a frightened person is you. Then the whole trip of, 'What's good for me? What do I want? What do I need?' just becomes less interesting. And that's where the power is that changes the universe.

Posted by oreydc at 2:54 PM No comments: Links to this post

Sometimes when I’m asked to describe the Buddhist teachings, I say this: Everything is connected; nothing lasts; you are not alone. This is really just a restatement of the traditional Three Marks of Existence: non-self, impermanence, and suffering.

—Lewis Richmond, "The Authentic Life"
Posted by oreydc at 11:00 AM No comments: Links to this post

Via BBC / More or Less: Hans Rosling - the extraordinary life of a statistical guru

A huge hole was left in the world this week with the death of the Swedish statistician Han Rosling. He was a master communicator whose captivating presentations on global development were watched by millions. He had the ear of those with power and influence. His friend Bill Gates said Hans ‘brought data to life and helped the world see the human progress it often overlooked’. In a world that often looks at the bad news coming out of the developing world, Rosling was determined to spread the good news, extended life expectancy, falling rates of disease and infant mortality. He was fighting what he called the ‘post-fact era‘ of global health. He was passionate about global development and before he became famous he lived and worked in Mozambique, India and the Democratic Republic of Congo using data and his skills as a doctor to save lives. Despite ill health he also travelled to Liberia during the Ebola outbreak in 2014 to help gather and consolidate data to help fight the outbreak. On a personal level he was warm, funny and kind and will be greatly missed by a huge number of people.
Presenter: Tim Harford
Producer: Wesley Stephenson

Make the jump here to listen to article
Posted by oreydc at 10:55 AM No comments: Links to this post