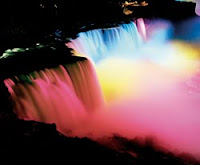 In order to highlight what they predict will be booming gay marriage tourism, city officials in Niagara Falls say they are working to have the falls illuminated in the colors of the rainbow on the first days of legalized same-sex unions.


Niagara Falls Mayor Paul Dyster said “This event, which will highlight Niagara Falls on an international level as a premier wedding and honeymoon destination, will serve as a tremendous economic shot in the arm for not only the area’s hotels and attractions, but for the florists, bakeries and restaurants throughout the city.” Dyster said. “Those who come here will see the efforts made by this administration in reinventing our downtown tourist district and be welcomed into a city that will once again reclaim its title as the honeymoon capital of the world.”