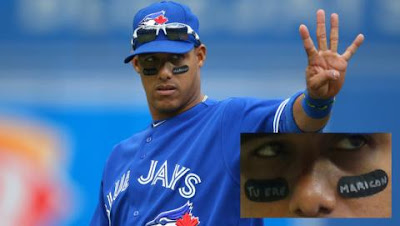 Today, the Toronto Blue Jays announced that shortstop Yunel Escobar will work with GLAAD and the You Can Play project, after he was seen with an anti-gay slur written in Spanish on his eye-black over the weekend. The team also announced that Escobar will serve a three-day suspension. GLAAD has been in conversations throughout the day with the team and with Major League Baseball (MLB) about the incident. In announcing Escobar's suspension and intent to work with GLAAD and You Can Play, the team today stated "The Blue Jays want to reaffirm that discrimination of any kind will not be tolerated. The club looks forward to supporting the efforts of You Can Play and GLAAD to help promote education for players and fans alike and to help keep language like this out of the game and society."

RELATED: The Toronto Blue Jays are owned by Rogers Communication, the same company that last year fired Sportsnet host Damian Goddard, who then told the world that he was let go because of "a single tweet supporting one-man one-woman marriage." Rogers dismissed that claim as ridiculous, but has refused to discuss the real reason for the firing because "we do not discuss personnel issues with the press." Goddard, who is Catholic, has since become a martyr to and spokesman for Vatican front group NOM and has a case pending before the Canadian Human Rights Commission. He just posted the below tweet.

UPDATE: Escobar may have been forcing into working with GLAAD, but he's clearly not quite apologizing. My pal Andres Duque just translated a press conference response.


Reposted from Joe
Posted by oreydc at 7:31 PM