Via Elephant Journal: The Rainbow-Colored Wildfire is Spreading—But Guess Where Gay Marriage is Still Not Legal? 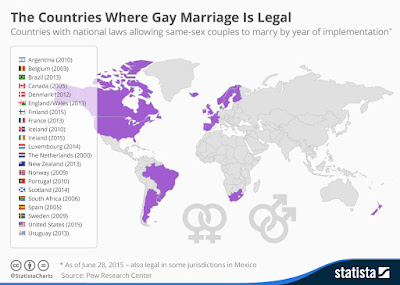 It warms my heart to see nation after nation recognize the rights of a minority that for so many years have been sidelined and marginalized.

Europe—hosting some of the most liberal countries—was the first cab off the rank, the Netherlands being the first to recognize equal rights for all back in 2001.

(Can we all pause for a moment to reflect on that momentarily. 2001. Does anyone else think it’s rubbish that 14 years later this is still an issue?!)

From there, in a series of dominoes, others came forward:

Twenty-one countries all up.

Twenty-one countries in total recognizing that all who are in love should have the right to get married, regardless of gender.

It may have taken longer than I would have liked but this is still an incredible shift!

There is one country however, still notably missing from the list that. This is a well-known Western country that continues to sit on the proverbial fence.
Australia.

Chances are this comes as a surprise to you.

I recently heard a radio interview asking Americans whether they thought gay marriage was legal in Australia. Every person who was asked said yes.

Internationally, Australia is seen to be a modern culture. Much more accepting, and dare I say liberal, than The United States.

The current political environment in Australia is currently of a much more conservative nature, and herein lies the source of the holdup.

Our Prime Minister, Tony Abbott, is publicly against gay marriage. This is despite having an openly gay sister who is a forceful driver of Australia legalizing marriage equality. I’m ashamed to Abbott’s recent comments indicate a preference for keeping to an agenda of growing the economy and building jobs for Australians, highlighting that this is what he and his party were voted in for.
The media, however, have entirely other ideas.

Not a day goes by here in Australia without some report referencing gay marriage rights. With the direction of all other developed nations blowing the wind towards marriage equality, for many here, it only seems like a matter of time.

Continued coverage of this issue across all media platforms, both internationally and locally, is keeping marriage equality on the forefront of everyone’s mind. As research illustrates how people look to the media for information on the existence and severity of current issues, it’s fairly safe to say this particular issue of marriage equality is not going away.

We certainly can’t just sweep it under the same rug we continue to sweep the horrific treatment of our Indigenous people (that’s another story entirely).

Personally I am embarrassed by the sluggishness of my country in supporting marriage equality. As was so beautifully articulated in a recent article I read, this is ‘an issue that helps define the social fabric of a nation’.

The change in law may not directly affect me but I want to be able to proudly proclaim that my country stands for equality.

That my country does not diminish a person’s love based on gender.

That above all, Love Fucking Wins in Australia too.

At some point in the (hopefully) not too distant future, marriage equality will go to vote in Australia, and I can’t see it being rejected when it does. Sadly, while many countries can now report that #lovewins, Australia has some way to go before we can proudly fly the same rainbow coloured flag.

For now, as the only developed English speaking country that has not reformed their laws, Australia insists on staying in the Equality Stone Age and I for one, am impatient to see that shift.

Make the jump here to read the original posting