Labels: "ex-gay", religion, tweet of the day
reposted from Joe
Posted by oreydc at 5:12 PM No comments: Links to this post

Today in WTFland: American Family Association: The First Amendment Only Applies To Christians 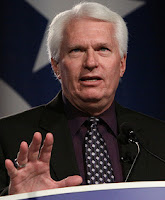 "The First Amendment was written neither to guarantee freedom of religion to Muslims or Buddhists or Hindus nor to prohibit their free exercise of religion. It wasn’t written about them one way or another. It was written for one specific purpose: to protect the free exercise of the Christian religion. We must be clear: the First Amendment does not prohibit the free exercise of alternative religions, but neither does it guarantee it. It simply does not address the issue at all." - American Family Association spokesman and national radio host Bryan Fischer.
Labels: AFA, Bryan Fischer, Christianists, dominionists, First Amendment, hate groups, liars, theocracy
reposted from Joe
Posted by oreydc at 5:10 PM No comments: Links to this post

Long Island Episcopal Bishop Lawrence Provenzano has put his foot down against gay clergy who residing in homosexual relationships, and has given a nine month deadline for them to either get married or stop living together, according to the News Observer. “I need to be mindful that the church has always asked people to live in committed monogamous, faithful relationships. I won’t allow heterosexual clergy to live in a rectory or church housing without the benefit of marriage. When one puts it in that context, then you see how it all begins to make sense,” said Provenzano. Reverend Christopher Hofer, pastor of the Episcopal Church of St. Jude agrees with Provenzano, “I think his statement was not only fair, but beyond generous. It gives people time, acknowledging that there’s a financial component involved and recognizing that some may not choose to live together.

Posted by oreydc at 4:51 PM No comments: Links to this post